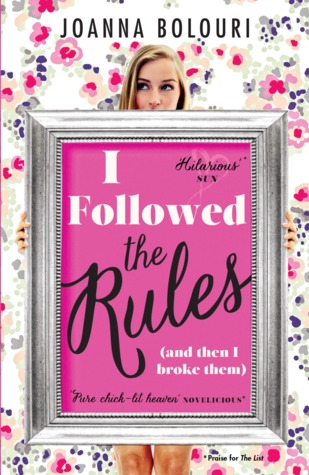 "Rule 1: Never ask him on a first date. Rule 2: Laugh admiringly at all his jokes. Rule 3: Always leave him wanting more.

Have you heard of The Rules of Engagement? It's a book that promises to teach you to find the man of your dreams in ten easy steps. Unsurprisingly, I don't own a copy. What is it, 1892?

But I'm a journalist, and I've promised to follow it to the letter and write about the results. Nevermind that my friends think I'm insane, I'm stalking men all over town and can't keep my mouth shut at the best of times.

My name is Cat Buchanan. I'm thirty-six years old and live with my daughter in Glasgow. I've been single for six years, but that's about to change. After all, I'm on a deadline.

I Followed the Rules and this is what happened."

I Followed the Rules really is your average contemporary rom-com. I've read very similar sotries hundreds f times. But I loved it! It was hilariously funny and I giggled out loud a lot. It's also a pretty easy and quick read so perfect for my re-introduction to reading and blogging.

I Followed the Rules is set in Glasgow. I don't know Glasgow too well, but I'm Scottish so I found the characters and the dialect so familar (and relatable in some cases). The characters are also pretty likeable too, although some of the minor characters, such as Cat's friends, tend to blend into one. Cat's daughter Grace is also the sassiest 8-year-old ever!

I Followed the Rules is told from the first-person perspective of Cat and I found her inner-monologue just hilarious. So Scottish! The plot is pretty predictable. I saw all the "plot twists" coming from a mile away, but this didn't actually take away my enjoyment. I loved reading the hilarious ways in which the "twists" came about too. The ending is also just perfect for your average rom-com.

The plot is neither too slow or fast - it flowed at just the right pace. It's not always logical in my eyes, but Cat is following advice from a dating book so there was definitely going to be a few odd bits (for lack of a better word).

I enjoyed everything about I Followed the Rules - the characters, Cat's voice, the setting, and the ending. The only reason I gave this book a 4 instead of a 5 is that I've read this story countless times before. However, I thought the dating book was a nice wee twist to the story. I'd definitely recommend this book to anyone who likes contemporary romance, and particularly to Scottish people as they will definitely understand the Scottish humour! I can't wait to read more by Joanna Bolouri - she's just fab!

Sunday, February 18, 2018
The Sunday Post is a weekly meme hosted by Kimberly of  Caffeinated Reviewer . It’s a chance to share news. A post to recap the past week on your blog and showcase books and things we have received. Share news about what is coming up on our blog for the week ahead.
1 comment
Read more

Top Ten Tuesday: Books That Have Been on my TBR List the Longest and I Still Haven't Read

Tuesday, February 06, 2018
Top Ten Tuesday is a weekly meme hosted by  That Artsy Reader Girl . This week's topic is ten books books that have been on my TBR list the longest and I still haven't read. I'm going to go according to my Goodreads TBR (which was started in 2015).
6 comments
Read more

Book Review: The Last Beginning (The Next Together #2), Lauren James

Thursday, June 15, 2017
Title: The Last Beginning Series: The Next Together #2 Author: Lauren James Published: 06/10/2016, Walker Books Pages: 352 Source: Bought Format: Paperback Rating: 3/5 "Sixteen years ago, after a scandal that rocked the world, teenagers Katherine and Matthew vanished without a trace. Now Clove Sutcliffe is determined to find her long lost relatives. But where do you start looking for a couple who seem to have been reincarnated at every key moment in history? Who were Kate and Matt? Why were they born again and again? And who is the mysterious Ella, who keeps appearing at every turn in Clove's investigation?  For Clove, there is a mystery to solve in the past and a love to find in the future."
Post a Comment
Read more
Powered by