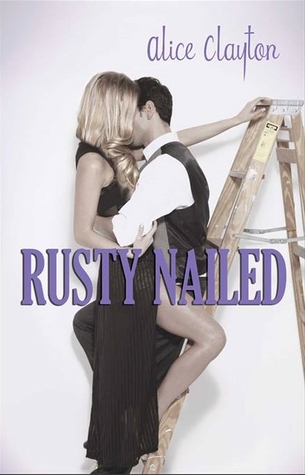 Title: Rusty Nailed
Series: Cocktail #2
Author: Alice Clayton
Published: 24/06.2014, Gallery Books
Pages: 288
Source: Bought
Format: Paperback
Rating: 3.5/5
Can living together still be knock-the-paintings-off-your wall smexy?
Having it all was never so thrilling... or so complicated. Caroline Reynolds and Simon Parker are all set to play house but their schedules leep coming between them and the sheets. With her boss on an extended honeymoon, Caroline's working crazy-long hours running the business, while Simon gallivants all over the world for his job. Still, their reunion sex is hot, hot, hot proving that absence makes the heart fonder, and the libido stronger...
Then a trip to his childhood home has Simon questioning his priorities, wondering whether his lifestyle is still the answer for him. Suddenly he's choosing to stay home rather than photography exotic locals, and Caroline's caught in a quandary. With her interior design career skyrocketing, does she have to choose between personal and professional? And as apple pie ad white picket fences start to loom scarily in their future, is this unconventional couple really ready to quit fooling around?
Offering a hilarious, honest, and steamy portrait of life as a twenty-first-century girl, Alice Clayton serves sexy straight up... with a twist.

Rusty Nailed is the second book in Alice Clayton's Cocktail series - the first being Wallbanger. This book was an enjoyable read, but it was just not as amazingly perfect as Wallbanger. Although there is still humour it's not as laugh out loud.

To me, the premise of the story is very much real. It deals with the feelings and struggles involved with moving in/living with someone. Well, it's how I imagine it would feel. The story also deals with Caroline's growing feelings for Simon and how she struggles to deal with them.

Once again, the story is told via Caroline's perspective allowing for the perfect insight into these struggles. It also provides the reader with more of her witty inner monologue. I guess the story is predictable in a way because you kind of know it will work out, but it's enjoyable all the same. And it allows the reader to relate to Caroline and Simon's problems. Rusty Nailed wrapped up their story nicely (I understand the next book in the series isn't directly related to them).

I really enjoyed the characters once again. Simon and Caroline mesh so well together, yet have their own lives too. They have an almost perfect balance of getting on as well as fighting (if that makes sense) and it was nice seeing a fictional couple going through the same problems as any normal couple. It shows that life isn't always sunshine and daisies when you love someone. And Clive also continued to add great humour to the story. I loved the conversations that both Caroline and Simon would have with him when they think they're alone. I do exactly the same with my dogs!

The one character that did annoy me slightly was Caroline's boss and friend, Jillian. It was horrible the way she just dumped her whole business on one person for an undisclosed period of time. If I had been Caroline, I would have told her where to stick it! Friend or not!

I also didn't really enjoy the storyline between Neil and Sophia. To me, it just added unnecessary drama where there could have been more humour. I honestly wanted to bang their heads together.

Saturday, August 21, 2021
The Bout of Books readathon is organized by Amanda Shofner and Kelly Rubidoux Apple. It’s a weeklong readathon that begins 12:01am Monday, August 16th and runs through Sunday, August 22nd in YOUR time zone. Bout of Books is low-pressure. There are reading sprints, Twitter chats, and exclusive Instagram challenges, but they’re all completely optional.  For all Bout of Books 32 information and updates, be sure to visit the  Bout of Books  blog.  - From the Bout of Books team
Post a Comment
Read more

Sunday, August 15, 2021
The Sunday Post is a weekly meme hosted by Kimberly of  Caffeinated Reviewer . It’s a chance to share news. A post to recap the past week on your blog and showcase books and things we have received. Share news about what is coming up on our blog for the week ahead.
20 comments
Read more
Powered by