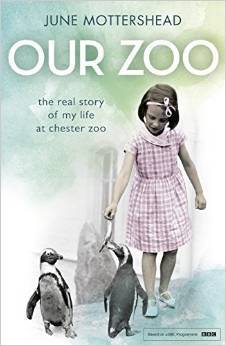 "When George Mottershead moved to the village of Upton-by-Chester in 1930 to realise his dream of opening a zoo without bars, his four-year-old daughter June had no idea how extraordinary her life would become. Soon her best friend was a chimpanzee called Mary, lion cubs and parrots were vying for her attention in the kitchen, and finding a bear tucked up in bed was no more unusual than talking to a tapir about granny's lemon curd. Pelican, penguin or polar bear - for June, they were simply family.

The early years were not without their obstacles for the Mottersheads. They were shunned by the local community, bankruptcy threatened and then World War Two began. Nightly bombing raids turned the dream into a nightmare and finding food for the animals became a constant challenge. Yet George's resilience, resourcefulness and tenacity eventually paid off. Now over 80 years since June first set foot in the echoing house, Chester Zoo has achieved worldwide renown.

Here, in her enthralling memoir, June Mottershead chronicles the heartbreak, the humour, the trials and triumphs, above all the characters, both human and animal, who shaped her childhood."

Our Zoo is a wonderful and personal insight into the establishment of a family run zoo (Chester Zoo). It highlights not only the struggles of starting the zoo but also the struggle to feed the animals during the rationing. It is definitely a fun, light read.

Our Zoo is an extremely realistic memoir by June Mottershead about her life living in a zoo from the age of four. There are only a few minor details lost through time (i.e. names etc). It is full of unique memories which clearly mean so much to June Mottershead and I feel privileged to have read them.

Our Zoo is also written in a very colloquial and easy to read manner. June Mottershead's story made me smile, laugh and very nearly cry. I only wish the story continued on further than it did (but, of course, it is clear that a lot of time and effort went into this wonderful story).

I would definitely recommend Our Zoo to fans of non-fiction, memoirs and animals. I also cannot wait to find a copy of the BBC drama series based on June Mottershead's fantastic stories. It also makes me want to visit Chester Zoo.