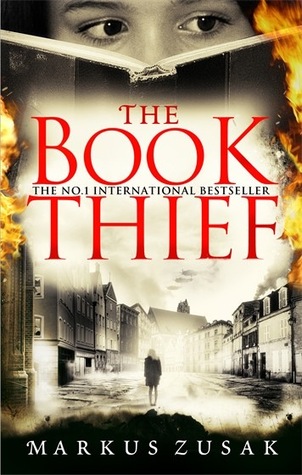 Title: The Book Thief
Author: Markus Zusak
Published: 2012, Random House Children's Publishers
Pages: 584
Source: Bought
Format: Paperback
Rating 4/5
This is the tale of the Book Thief as narrated by death. And when death tells a story you really have to listen. It is just a small story really, about, amongst other things: a girl, an accordionist; some fanatical Germans; a Jewish first fighter; and quite a lot of thievery.

The Book Thief was quite a weird book for me to read not because it isn't something I usually read.  But because although I absolutely loved it, I really struggled to get into it and at times I couldn't be bothered to read it.  Hence, why it has taken me slightly longer to get through it.

In basic terms, The Book Thief is about the life of a young German girl and her family and friends during World War II.  The book begins with Liesel being sent to live with a foster family: Hans and Rosa Hubermann.  She is a young girl of 10 years old and doesn't understand why her mother is sending her away.  She has also been left traumatised by her younger brother's death during the journey and has nightmares for months afterwards.

The Book Thief is narrated by Death and Zusak has done an amazing job in turning death into a character.  Death is probably one of my favourite characters in the book just because of his unique way of telling Liesel's story and his descriptions are brilliant.  Death describes all the characters in a way that makes them feel real to the reader and also makes you truly feel for them.  However, The Book Thief is not a story that keeps you guessing as Death has a tendency to give away spoilers many chapters before the events happen, even at the start of the book.  So you always have a vague idea of what will happen but it is a great story regardless.

Hans is the perfect loving father to Liesel.  He is patient with her and rarely scolds her, even when he finds out about the thievery.  He sits with her and calms her after nightmares and even teaches her to read.  Rosa on the other hand, has her own unique way of loving Liesel, calling her "Saumensch", but it is shown that she does have a more caring side.

The Book Thief is a book that had me smiling in parts as well as being in tears in others.  This is mainly due to how much you as a reader end up caring for Liesel and her family and friends, including Hans, Max and Rudy.  I'm also pleased with the way in which the Liesel's story ended, although of course not everything is great (it is set during World War II after all).  Liesel goes through so such a short period of her life and it goes to show just how the war affected not only the soldiers but those left at home, especially the children.

Overall, I gave The Book Thief 4/5.  Mainly because though I loved the story, I did struggle to even pick up the book at times.  But that could just be everything else in my life affecting my reading as I have had a lot going on at the moment.  So I may feel different and give it a 5 if I ever read The Book Thief again (which I probably will).

Thursday, September 02, 2021
Title: The Editor's Wife Author: Clare Chambers Published: 2nd September 2021, Cornerstone Pages: 404 Source: Netgalley Format: Kindle Rating: 4/5 When aspiring novelist Christopher Flinders drops out of university to write his masterpiece (in between shifts as a fish delivery man and builder's mate), his family is sceptical. But when he is taken up by London editor Owen Goddard and his charming wife Diana it seems success is just around the corner. Christopher's life has so far been rather short of charm - growing up in an unlovely suburb, with unambitious parents and a semi-vagrant brother - and he is captivated by his generous and cultured mentors. However, on the brink of realising his dream, Christopher makes a desperate misjudgment which results in disaster for all involved. Shattered, he withdraws from London and buries himself in rural Yorkshire, embracing a career and a private life marked by mediocrity. Twenty years on a young academic researching into Ow
2 comments
Read more
Powered by