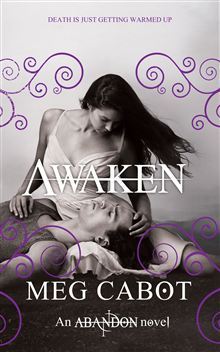 
"Death has her in his clutches.  Seventeen-year-old Pierce Oliviera knew by accepting the love of John Hayden she'd be forced to live forever in the one place she's always dreaded most: the Underworld.  The sacrifice seemed worth it though, because it meant she could be with the boy she loves.  If the balance between life and death isn't fixed, both the Underworld and Pierce's home back on Earth will be wiped away.  But there's only one way to restore order: someone has to die."


Awaken continues the story of Pierce Oliviera and John Hayden from where it was left off at the end of Underworld.  The trilogy is loosely based on the myth of Hades and Persephone.  You can follow the links to my reviews for both Abandon and Underworld.

I enjoyed Awaken far more than I did the previous books.  I didn't want to put this down and kept turning pages.  All the loose ends were tied up nicely and there were no questions left unanswered.  Even the back story concerning Uncle Chris and Seth Rector's dad was tied up nicely.

I even liked Pierce a lot more in this Awaken than I did in Abandon or Underworld.  She actually began to use her brain more and even kicked some butt.  She has definitely changed from the stupid and spoiled rich girl of Abandon.

My adoration of Henry continued to grow throughout Awaken although we don't see him as much as I would have liked.  Even though he has lived for nearly 200 years, he is still mentally 10 years old.  This is shown through his (utter brilliant) plan of attacking the Furies with a slingshot - something that only a 10-year-old could think of.

John's character has also developed quite nicely since Abandon.  He listens and takes on board the thought of others more and no longer tries and kill everyone  most people that look at Pierce the wrong way.  His confusion at modern terms such as 'druggie' and 'hippie' was also quite amusing to read.  He did, however, keep harping on about Pierce refusing to marry him, but that will be the 1800s coming out in him.

One thing I wasn't sure about was that some of the plot points were tied up rather easily.  It seemed a rather convenient and lazy way to tie up some parts.

Overall, I really liked Awaken and I didn't actually expect to.  I believe that many teen girls would love the Abandon trilogy, especially those that are fans of Twilight.