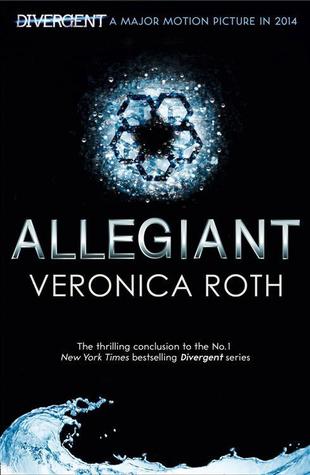 
"The faction-based society that Tris Prior once believed in is shattered -fractured by violence and power struggles and scarred by loss and betrayal. So when offered a chance to explore the world past the limits she's known, Tris is ready. Perhaps beyond the fence she and Tobias will find a simple new life together, free from complicated lies, tangled loyalties and painful memories.

But Tris's new reality is even more alarming than the one she left behind. Old discoveries are quickly rendered meaningless. Explosive new truths change the hearts of those she loves. And once again Tris must battle to comprehend the complexities of human nature - and of herself - while facing impossible choices about courage, allegiance, sacrifice and love."


Once again Allegiant starts off almost directly from Insurgent's last scene - a few days later at the most. Allegiant begins with Tris's imprisonment and follows her as she plans to leave the city with Tobias and a select few to help the people over the fence.

Unlike Divergent and Insurgent, Allegiant is not just told from Tris's perspective. It was also told, on an alternating basis, through the perspective of Tobias. This was brand new and upon finishing Allegiant I can really understand why Veronica Roth writes the story this way. I actually quite liked being in Tobias's head. It wasn't the same as Tris, but it was a totally new glimpse into Tobias's hidden personality and feelings.

I found the vast majority of Allegiant pretty unpredictable APART from one soul-destroying event at near the end that I prayed wasn't going to happen. This was not something I wanted to read first thing on a Sunday morning. I cried so much and the tears were not pretty. I felt like my heart had been ripped out. Why? Just WHY?

I also found Allegiant to be quite a bit slower than Insurgent. The story started off at a fairly fast pace then slowed down around the middle before the climax. There was quite a bit of waiting around and planning the next move compared to Insurgent where everything was bam bam bam one after the other. There also weren’t as many twists to the story, other than the gut-wrencher. However, the ending was one hell of a climax to the story and just so bittersweet for everyone involved (and reading).

Tris also gets her "act" together in Allegiant and finally holds and shoots a gun again. Though she is still quite unsure of them, but who can blame her to be honest. She continues to show her bravery as well as her capacity to forgive over and over again right up to the climax. We also see a jealous streak within her when it comes to girls speaking to Tobias. I feel this makes her more relatable as a young girl who is still emotionally immature when it comes to relationships. There are continued problems within the relationship, but Tris and Tobias finally start to communicate and be honest with each other. I feel like I can go on and on about how much I like the characters but I would also be repeating myself so I'm just going to say that I still absolutely love Tobias even though he can be a bit of an arse.

I also feel that Veronica Roth has definitely been taking lessons from J.K. Rowling! The number of deaths in this series is unreal! And it's only three books!

I would definitely recommend Allegiant and the whole Divergent trilogy. They are definite must-reads and I wish I had read them sooner. I'm planning to read Four this week too and I hope to see more by Veronica Roth soon as I will definitely be checking her future work out.