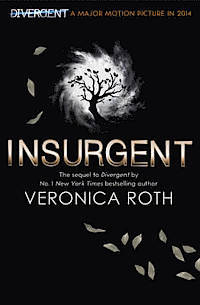 
"One choice can transform you - or it can destroy you. tris Prior's initiation day should have been marked by celebration: instead it ended with unspeakable horrors. Now unrest surges in the factions around her as conflict between their ideologies grows.

In times of war sides must be chosen and secrets will emerge. Tris has already paid a terrible price for survival and is wracked by haunting quilt. But radical new discoveries and shifting relationships mean that she must fully embrace her Divergence - even though she stands to lose everything..."


Insurgent picks up on the train right where we left Tris and Four/Tobias in Divergent. This was great as it made it so easy to return to the story after a small break.

Like Divergent, Insurgent is told from the perspective of Tris. This means that like Tris, we don't know who can be trusted, especially when it appears like a few characters switch sides constantly. Therefore, this makes Insurgent a very suspenseful book and I could barely put it down. Not knowing who to trust also meant the story was pretty damn unpredictable and I never had a clue what would happen next. There was just so many plot twists!

I couldn't actually believe how much was revealed in Insurgent. But for every question that was answered, more questions popped out of the woodwork. And I loved it! Not all the questions were answered, but this just makes me more excited to start Allegiant.

Insurgent is also an extremely fast-paced book with so much happening. I was honestly surprised by how much had actually happened in the first third of the novel alone. This was another reason why I couldn't put Insurgent down. I was on the edge of my seat through the majority of the story. It really is flying by the seat of your pants. It also didn't feel as long as what it actually is either - I mean over 500 pages is a pretty big book in my opinion.

Once again, I really enjoyed reading Tris. I liked how we saw a weaker side of her. She is haunted by the events of Divergent and is most definitely suffering through PTSD. I really did feel for her (and even had tears streaming down my face at one point). Tris really is put through the wringer and this causes her to unravel. She loses so much trust in everyone and is so suspicious of their actions. Insurgent Tris is definitely completely different from Divergent Tris and I was fine with that. It seemed like a logical part of her character development to me. But I really would love to see Divergent Tris return in Allegiant.

In a way, I liked how the change in Tris affects her relationship with Tobias. It puts stress on the new relationship without adding anyone into the equation. And this was, like the original slow build of the relationship in Divergent, really refreshing. Tris and Tobias just need to learn to communicate with each other and share their feelings - something they really struggle with due to their Abnegation upbringing. I do wish we saw more of happy Tris and Tobias though.

I still adore Tobias. He just wants to help Tris through her grief. He doesn't always do this in the right way, but he is a male. I also really wish he opened up to Tris more, but it's still a new relationship and they will need to work up to some discussions. I also quite liked seeing how Tobias reacts to being around his father again.

I think everyone should read Insurgent (but read Divergent first of course!). Especially if you like fast-paced dystopias with a hint of romance. I cannot wait to read Allegiant!