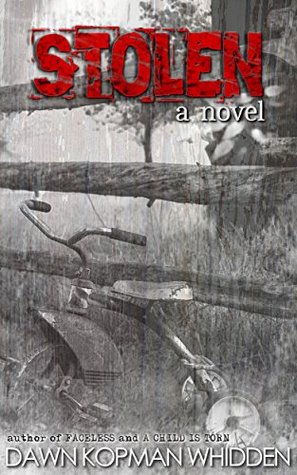 "Another homicide has rocked the small town of Fallsburg, NY.  In a cabin nestled deep in the woods two male victims are discovered, both gun shot victims.  One is deceased, the other one is barely alive.  But it is not the murder itself that has detectives Jean Whitley and her new partner Marty Keal frantic to find out the answers of what occurred in that cabin, but it is the identities of the two small children also found at the scene.  One child is quickly identified but the other a young boy remains a mystery.  The only one with possible answers lies with the man who lay critically wounded and unconscious in the hospital because the unidentified boy either can not or will not speak to tell the investigators who he is and what happened in that cabin that left one man dead and another barely hanging on..."


I really enjoyed Stolen.  I wasn't sure if I would as I haven't read any mysteries/thrillers before (that I can remember).  But I can definitely see myself reading more in the future now.  Dawn Kopman Whidden handled the tricky subjects of child abduction and abuse very well.  The story didn't go into too much harrowing detail and, in my opinion, it was written quite sensitively.

As I haven't read any mysteries/thrillers before I don't really have anything to compare it to.  I felt it was quite fast paced but I think this is quite appropriate for a thriller.  The setting felt quite real - being a hospital and a police station both are common locations for a police investigation to occur.

The characters were also fairly likable.  Especially Marty.  I like how Marty is portrayed as a very caring man.  He seems to genuinely care for the victims and their families and isn't just interested in closing a case.  I felt that Marty dealt with the case fairly well given his personal ties to a past kidnappee.  I also think he handled the case well considering his father was in hospital at the same time.

I was about 50-60% through Stolen when I worked out where the plot was leading to.  I felt it was somewhat predictable, however I found the last 5 or so chapters to be quite climatic/dramatic and the story tied up nicely.

I look forward to reading more from Dawn Kopman Whidden and I would definitely recommend Stolen to adults  (and mature teenagers) who are fans of the mystery and thriller genres.

Feel free to leave a comment.
Posted by Lauren at 09:00
Email ThisBlogThis!Share to TwitterShare to FacebookShare to Pinterest
Labels: Book review, Mystery, Thriller