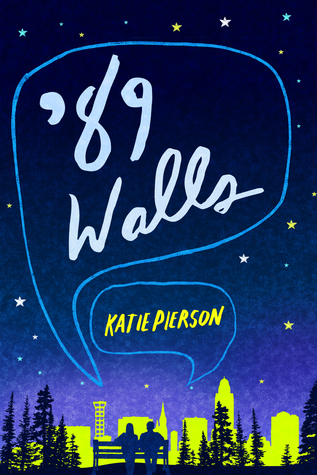 
"College is not in the cards for Seth. He spends his minimum wage on groceries and fake happiness to distract his mom from the MS they both know will kill her. It's agony to carry around a frayed love note for a girl who's both out of his league and beneath his dignity.

Quinn's finishing high school on top. But that cynical, liberal guy in her social studies class makes her doubt her old assumptions. Challenging the rules now, though, would a) squander her last summer at home, b) antagonize her conservative dad, and c) make her a hypocrite.

Seth and Quinn's passionate new romance takes them both by surprise. They keep it a secret: it's too early to make plans and too late not to care. But it's 1989. As politics suddenly gets personal, they find themselves fighting bare-fisted for their beliefs - and each other - in the clear light of day."


I enjoyed reading '89 Walls. But before I go any further I will say that I'm from Scotland so I know next to nothing about American politics (aside from the constant Sky News coverage during a presidential election). Therefore, I learned quite a bit whilst reading and this was something that I didn't really expect to happen in such a short YA novel.

I wasn't too sure about the political premise of the story. I can't really remember myself or anyone I went to school with being as interested in politics as the age of 17 as the characters in '89 Walls. (Of course, that did change with the onset of the Independence issue in Scotland.) But perhaps it's different in America, I've not been (yet) so I don't really know to much about America other than what I read or watch. Then again both Quinn and Seth have parents with strong political views (more on Quinn's side) so this may have just rubbed off onto both Quinn and Seth. Plus, they appear to study a lot of politics in social studies, a subject that wasn't offered at my school which in hindsight is kinda stupid. So in a way, I guess the political premise really does work given Quinn and Seth's upbringing. If '89 Walls gets more young people interested in politics that can only be a good thing.

'89 Walls is told via the third person and switches between the point of view of both Seth and Quinn. I liked this as it gives the reader a clear insight into their totally different upbringings - Quinn with her privileged background and Seth who was brought up by an ill single parent. The plot is your typical polar opposite teenagers falling for each other and going through the various associated problems but the political aspect does add something different. It was enjoyable, however I wish there was more to the ending, perhaps including Seth's viewpoint in the epilogue.

I did like both Quinn and Seth but I really liked Seth. He just had so much weight on his shoulders and I just wanted to hug him. He's just so cute, independent and emotionally strong. He works a minimum wage job just so his mother doesn't have to worry. You can easily tell how much he adores his mother and will do anything for her. He is basically her carer. I just wanted everything to work out for Seth and I really hope it did in the end. Seth just doesn't see what he's worth and I'm so glad that Quinn does. I know it is first love but I really hope they found their happily ever after. Quinn is also very brave - she learns to stand up for her views and even tells her mum something that was probably quite terrifying to do.

I also liked the secondary characters of Quinn's dad and Mr Levine. They both stood up for their beliefs but also allowed the kids to work out their own beliefs whilst guiding them. Although they could both be a bit pushy in their own way. But everyone tends to get a bit pushy when politics is involved.

I would definitely recommend '89 Walls. Perhaps to young adults around 16 and older - it does contain a bit of sex. I definitely learned a lot about American politics and learning something new is always a bonus when reading. I look forward to seeing what Katie Pierson writes next.