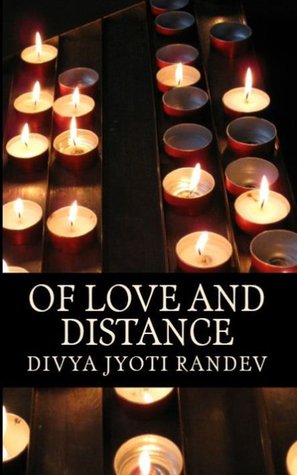 
"Robert Brown, a movie star, is abducted for ransom in a strange country. Lisa, an ordinary girl, is the unintended, unwanted abductee.  They develop a beautiful relationship during the ordeal.  Will Robert and Lisa overcome the physical and cultural distance and get together after the nightmare? Will they be able to keep their closely guarded secret from the world?"

I really enjoyed Of Love and Distance.  It was a nice easy and quick read for a lazy Saturday afternoon.  I have a feeling it may be similar to other books, however it is the first of it's kind that I have read.

I felt the setting was fairly realistic.  A young woman working on the society page of a newspaper will probably run into a famous movie star now and again.  Especially when said movie star is promoting an upcoming film.  I quite liked both Lisa and Robert.  God only knows what it would be like to go through such an experience and they were bound to bond in some way over it.  I did find Lisa slightly annoying occasionally though as I didn't quite understand why she wanted to stay in India when everyone, including her family, shunned her.  Especially when Robert was so willing to help her and have her stay with him in England.  Perhaps it was just fear of the unknown.

I also liked the way in which the story was told.  Especially the first half of the novel.  I liked that it was told in flashbacks during a televised interview about Lisa's ordeal.  In a way it reminded me of the film version of Slumdog Millionaire (I've not read the book) where each question was linked to a memory.  The chapters were quite short and to me this gave the appearance of the book having a fast pace as I raced through each chapter.  I also didn't expect the plot twist that occurred about half way through the book.  Though, in hindsight, I probably should have.

I did like the ending, it was nice.  Though I do wish there was more to it. I would have liked to have seen more of the public reaction to Lisa and Robert's big secret.

I would definitely recommend Of Love and Distance to other readers looking for a nice, easy contemporary romance.  I also look forward to, hopefully, more books by Divya Jyoti Randev.