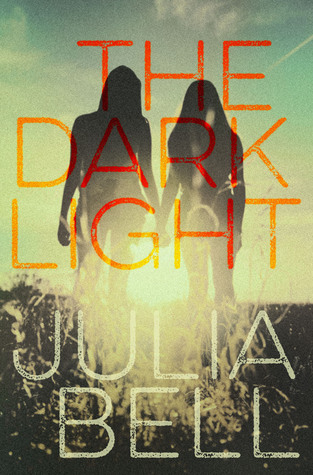 
"'Ten minutes to midnight!' Jonathan shouts over the sound of the blazing fire. Sparks rise into the sky and mingle with the stars. 'Only ten minutes!' Bevins says, falling down on his knees. 'So it begins.'

Rebekah has lived on the island her whole life, and it's only now that she's starting to wonder what she might experience outside her strict religious community. Alex has been sent to the island to escape her dark past, and through her eyes it's a dark and sinister place. Thrown together by chance, Rebekah and Alex strike up an unlikely friendship and it's together that they attempt to break free of their worlds and make a world of their own. But when a kiss between the girls is witnessed by an islander there is no escape they can make - the Rapture is coming for them all."

I really wanted to like The Dark Light but I just couldn't get into it. I tried to take a break and read something else but it just wasn't my thing. I just didn't like the way in which the story developed or the premise in the end. Therefore I DNFed at 26%.

I didn't particularly like any of the characters. Rebekah just seemed too narrow-minded and I got tired of her preaching. The same with Hannah but she was worse. Honestly, every little thing is a sin in their eyes, even using a mobile phone. I practically hated Mr Bevins and I didn't even get around to meeting him in the story. he just sounded so full of himself and had a "my-way-or-no-way" attitude.

On the other hand, I sort of liked Alex. She is just trying to figure herself out really and is bullied for being different from the other girls. However, there was something, and I can't quite put my finger on it, that i just didn't like about her.

I really don't think that this is a good representation of Christianity and the Church. It appears to be more of a cult than anything else and the majority of Christians re nothing like what is described in the book. In fact, it sort of reminded me of a certain "church" in America. I just got frustrated with the whole aspect of the story and it made me quite uncomfortable and this was a major reason why I chose to DNF.

I honestly doubt I will recommend The Dark Light to anyone. I also don't think I will read Julia Bell again, but I suppose never say never.