Book Review: The One (The Selection #3), Kiera Cass 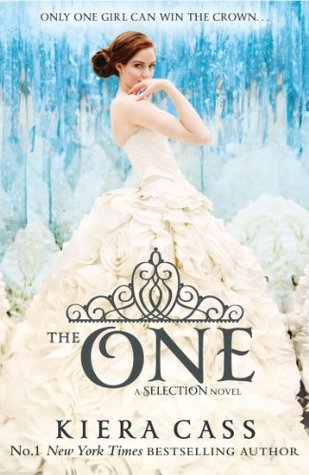 "The Selection changed the lives of thirty-five girls forever. Now, only one will claim Prince Maxon's heart...

It's swoon meets the Hunger Games in the third instalment of The Selection series!

For the four girls who remain at the palace, the friendships they've formed, rivalries they've struggles with and dangers they've faced have bound them to each other for the rest of their lives.

Now, the time has come for one winner to be chosen.

America never dreamed she would find herself anywhere close to the crown - or to Prince Maxon's heart. But as the competition approaches it's end and the threats outside the palace walls grow more vicious, America realises just how much she stands to lose - and how she'll have to fight for the future she wants.

The breathtaking third title in The Selection series will make you swoon!"

So after reading The Elite in a weekend, I went straight to The One... and read it in less than a day! Then I was ill for a week and my reviews were put on a back burner. So this review is probably a bit sketchy. But Oh My God! How good it The One?!?

Once again, The One begins right where The Elite left off. And you are in on the action right from the very first page. The One is also slightly different to the first two books. The Selection and The Elite both dealth more with America finding her place and understanding her feelings for both Maxon and Aspen. The One, on the other hand, is a lot more... political, for lack of a better word. America is more sure of her feelings and wants to prove to King Clarkson that she has what it takes to be Princess. America is out to kick ass in this instalment of The Selection!

To be fair, in places the plot was kind of predictable (I still loved it)... BUT, then a curve ball would be thrown in. My emotions have never taken so many u-turns in such a short space of time! So much happens in such a short space of time, and not all directly relating to The Selection. But it's all still a major part in the overall storyline and the sub-plots definitely have a knock-on affect on The Selection, especially Maxon and America. The sub-plots were a nice change to the "who should I choose" dilemma going on for both America and Maxon.

Also, after not really liking Aspen in The Elite I've reverted back to almost loving him. He has his own little storyline and is slowly beginning to realise that America is not the girl for him. He begins to see her more as a sister (I think). And of course, he gets his own happy ending.

I also loved that we saw more of America's family and it's clear as day that America is a massive daddy's girl. We are also introduced to America's older brother, Kota, for the first time and he is such a prat! Think along the lines of Percy Weasley in The Order of the Phonix and you won't be far off. Not only do we learn more of America's family but we are also given more of an insight into her maids. It's great and definitely adds more depth to the story/world.

One thing I didn't expect was to actually like Celeste! If you were to tell me in the first book that I would grow to like her, I would think you were crazy! But she actually begins to open up more and it's sort of like the Regina George deleted scene from Mean Girls.

I really enjoyed The One and I will definitely be reading Kiera Cass again. I've actaully went and bought physical copies of the books to look pretty on my bookcase! Everyone should read it.

COYER Scavenger Hunt #51: read a book with a number in the title