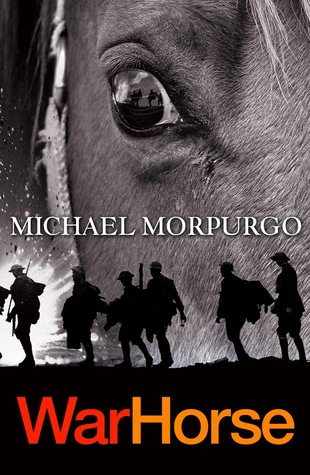 
""War Horse" is the story of Joey, a thoroughbred horse, and how he is forced into the thick of the harrowing, poorly-led battles of First World War."


War Horse is a wonderful children's book and I really wish I had read it when I was younger. I feel I would have liked it a lot more although it was still an enjoyable and interesting read.

War Horse is Joey's story from Joey's point of view and this is gives such a unique aspect to the story. It gives a completely different insight into World War I and you don't often hear of how an animal suffers during war. Joey's viewpoint also showed how quickly things could change during the war. He himself experiences the war from both sides and to him the English and the Germans don't seem different at all. To Joey there was no wrong side of the war. Work was work and Joey would have happily worked for either side along as he was treated with dignity.

War Horse is a pretty fast paced novel with four years of war condensed into 182 pages. There was always something major happening and this meant it was a very fast read. However, I do think some parts could have been fleshed out a bit more.For instance, characters would appear and then disappear again in, what felt like, an instant.

I feel that War Horse is a nice introduction to war and loss for children. I would definitely recommend War Horse to children around the age of 9 to 12. It's simple and puts a difficult subject into an easy to read format for younger reads. It was perhaps to simple for me but I would have absolutely loved this if I had read it when I was younger. This isn't the first Michael Morpurgo book I have read but it has been years and I'm to sure whether I will read one again - I now feel too old for them.


COYER Scavenger Hunt #55: Read a book featuring an animal prominently in the story.