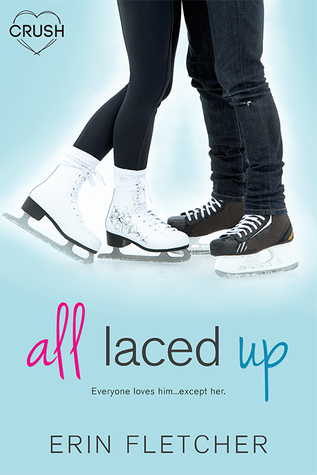 "Everyone loves hockey superstar Pierce Miller. Everyone except Lia Bailey.

When the two are forced to teach a skating class to save the rink, Lia’s not sure she’ll survive the pressure of Nationals and Pierce’s ego. Not only can’t he remember her name, he signed her bottle of water like she was one of his groupies. Ugh.

But if there’s one thing Lia knows better than figure skating, it’s hockey. Hoping to take his ego down a notch—or seven—she logs into his team website under an anonymous name to give him pointers on his less-than-stellar playing.

Turns out, Pierce isn’t arrogant at all. And they have a lot in common. Too bad he’s falling for the anonymous girl online. No matter how much fun they’re starting to have in real life, she’s afraid he’s going to choose fake-Lia over the real one…"

All Laced Up is such an adorably cute romance centred around ice skating. It is a very fun and quick read that I just absolutely devoured. But, of course, I love an ice skating read.

The majority of All Laced Up is set within an ice rink so an obvious choice when the main characters are a figure skater and a hockey player. I just love love love books set in ice rinks. (One of my biggest regrets is that I'm a rubbish skater). I also quite liked the fact that it was a struggling ice rink and the characters were pulled in to help bring in money. It gives quite a community feel to the book. A bit like the users of the ice rink are one big family who pull together in times of trouble.

I absolutely loved the main characters, Lia and Pierce. Actually, I probably loved Pierce more. He's just so down-to-earth and, for being such a star hockey player, he is far from cocky. I'm the least sporty person ever, but I could truly feel for him when he was struggling with his hockey. Plus, I loved his close relationship with his little brother, Carson. Pierce is a fantastic big brother and knows exactly how to help Carson (in fact he's better at it than his parents). Their interactions are just so adorable.

Like Pierce, Lia also has confidence issues with her skating. It's clear she is very good, but she just doesn't believe in herself. I just loved that neither of the characters were big-headed about their talent. I also loved the close relationship Lia has with her family. Unlike so many families in contemporary YA, Lia's mum always has a fairly good idea where Lia is and what she is doing. I found this just so realistic. Plus, they also have quite an open relationship where they actually speak to one another about things. I just loved the whole family dynamic of this book.

All Laced Up is told from the alternating perspectives of both Lia and Pierce. It's great at showing how both their real-life and online relationships develop and how they slowly build each other's confidence. Their story is slightly on the predictable side, but it was just so adorable that I really didn't mind at all. Plus, there was no over-the-top drama to the story, the story was kept nice and simple so it was such a quick and easy read. However, there were still twists to the story to keep it interesting and they were all tied up nicely in the end. The ending did include some drama, but I thought it was just perfect and ended Lia and Pierce's story in just the right way.

I really enjoyed All Laced Up (and I just knew I would really). It's just a simple, adorable contemporary YA and I would definitely recommend it to everyone who loves a nice, quick romance. I'm definitely going to keep my eye out for the sequel too!